Think of grand European mountains and inevitably it’s the Alps and the Pyrenees. But in the last couple of years I’ve had the chance to broaden my own definition of European mountains, with hiking trips into the Picos de Europa of Spain and, most recently, the Central Apennine ranges of Abruzzo in Italy.

Campo Imperatore in Abruzzo is 500 kilometres south of the Alps, but the scene is a brilliant imitation. On this vast plain you could easily be in the Alps. More disorientating still is the knowledge that you could jump in a car and be in Rome inside two hours.

Campo Imperatore is the largest alpine plain in Italy, stretching around 25 kilometres end to end. The Gran Sasso, Italy’s highest run of peaks outside of the Alps, climbs above the plain, cradling Europe’s southernmost glacier. The rocky bluffs of the massif disappear into dark cloud, and there are wolves, lynxes and chamois hiding away somewhere here. Briefly during WWII the Italians thought so little of Mussolini, they imprisoned him here.

The place is as impressive as it sounds. And Rome, remember, is just over there. 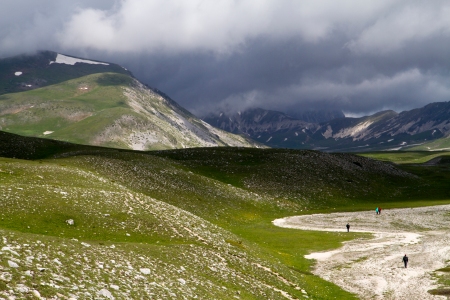 On Campo Imperatore I was hiking with a group, but the plain was so vast, so inviting of freedom, that I chose to walk alone most of the day. As we walked, the terrain funnelled us into a shallow valley gouged into the plain by a long-gone glacier. Alpine orchids bloomed from the banks, colouring the earth, and shards of sunlight roamed like spotlights through breaks in the cloud.

After a few minutes I veered away, climbing to a small ridge above the valley, looking down onto the line of walkers, with the Gran Sasso rising beyond. This is something I often do when I hike, ascending to watch the human figures below fade into insignificance. It’s a reminder of the true natural order of the world – that we’re simply passing through something far grander than ourselves. Try it and you’ll notice that the mountains don’t get any smaller but the people do. Mountains still have the ability and the strength to defeat us. Even if they’re not the Alps.