In his elegant book The Wild Places, Cambridge fellow Robert Macfarlane set out to explore the notion of wilderness by travelling to remote remnants of the British Isles. After wandering through the likes of Coruisk and Rannoch Moor, he came to the conclusion that wilderness could be as near as it is far – that a remote mountain range could be wild, but so too could a hedgerow. The wild world is not just some grand and craggy other, existing far from our everyday lives.

From the kitchen window of my house I look out over an estuary. Across five kilometres of water I can see an empty spit of land, treeless but for a small row of macrocarpas underscored by the faint white line of a beach.

I regularly kayak across the estuary to this beach, but recently I decided to make it my home for the night.

The paddle across is often done in the company of anchored cargo ships or a departing cruise boat. This particular evening, however, as dusk began to settle, dozens of little penguins drifted on the surface of the water, their necks craned in anxious watch. Gannets speared into the estuary around my kayak, snatching at dinner, and the beach ahead flared in the late sunlight.

I arrived at the beach before dusk, in time to watch the falling night settle the estuary into a millpond. The lights of the city centre glowed just 11 kilometres to the north – I was near to the city, but so very far from the city. In the dunes at the back of the beach I rolled out my sleeping bag and fell quickly asleep.

The night didn’t all go to plan. In the early hours, high winds arose across the city and estuary. When I woke at about 3am I was all but buried in sand – I’d become a sand dune of my own. I retreated to the tent I’d pitched beneath the macrocarpas in case of just such a situation, only to find it blown down. I re-pitched the tent and crawled inside, pinning it to the sand with my body weight but never really sleeping again. 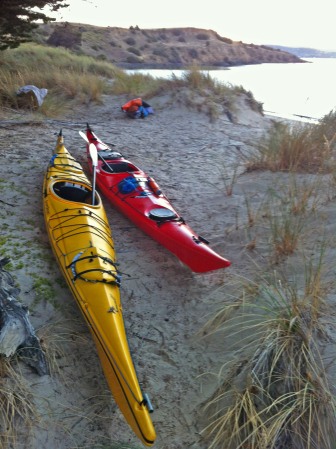 In the morning, waves rolled into the estuary, splashing over the kayak as I paddled back towards home. By 9am I was back at my work desk, beginning another day of writing. And I’d never once been out of sight of my house.

3 thoughts on “The Wild Side of Home”